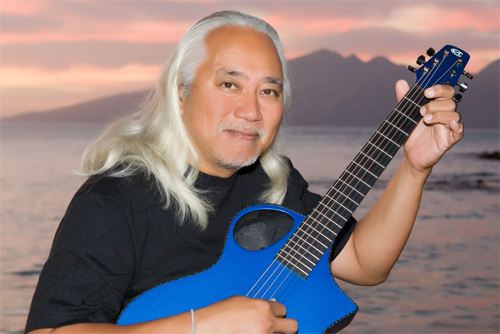 His newest album, Hawaiian Man, is a return to Noland’s traditional Hawaiian roots. “As far back as I can remember,” Noland says, “I was always surrounded by the beautiful sounds of Hawaiian Music. You can play the songs over and over and each time it’s refreshing and new.” Brother Noland is popular for his unique interpretations (or “Nolandization”) of traditional songs.

Brother Noland is most famous for his song “Coconut Girl” which launched the Jawaiian contemporary style music.  He has won numerous Hoku Awards including Best Reggae Album and his music is featured in several movies including “Pineapple Express” and “Snakes in the Plane”.  He is regularly featured and the Slack Key Guitar festivals around the islands.

Noland was born and raised in Kalihi-Palama, one of Hawaii’s economically poorest neighborhoods. He found his way out through his art and culture and now helps at risk youth define their choices and make a quality connection to the community. His music always carries a message of positive reflection, even though they are rooted in the reality we live in today. His work with at-risk kids has given him far more than he ever expected or could have imagined. The one on one connection that exists when he is able to teach them guitar, ukulele and composition is overwhelmingly positive. He’s set up arts programs in the public parks where they can discover their individual talents and has shown many that there is a good life; one very different than the one they believed they were destined to live.

Brother Noland also is a steward of the land. Hawaii is deep within Noland’s soul and so he cares for acreage on Molokai,

preserving Hawaiian customs, indigenous plants and animal species. This work allows Noland to maintain his connection with being Hawaiian and this connection feeds and inspires his music. Brother Noland lives aloha and you can hear it in every note he plays.