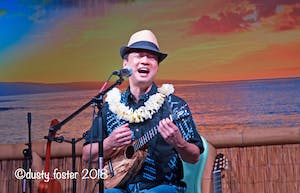 Daniel is a multi-instrumentalist, composer, arranger, performer, and Grammy Award winner. His six consecutive GRAMMY Awards include 4 for Best Hawaiian Music for compilation CDs from George Kahumoku’s Slack Key Show. Two others were collaborations with his childhood friend, Tia Carrere.

A Honolulu native, Daniel started music lessons at an early age and spent his teenage years orchestrating big band arrangements. He is a prodigy of the Grove School of Music, where he excelled in composition and film scoring. He began his professional career as the leader and keyboardist of the acclaimed '90s contemporary jazz band, Kilauea.

Currently, Daniel performs original songs in English and Hawaiian that feature his versatility on 'ukulele, slack key guitar, piano, and vocals. As an independent record company owner, he specializes in Hawaiian and acoustic-themed music. The label's eighty-plus albums include projects with prominent musicians from Hawai'i.

Daniel has also received three Na Hoku Hanohano awards including for Hymns of Hawaii vol. 1 & 2 with George Kahumoku Jr for Religious Album of the Year.  Daniel has recorded 6 albums with George in addition to the 6 Slack Key Show compilation albums. Daniel now resides in Los Angeles but performs every year somewhere in Hawaii, including at George’s Slack Key Show-Masters of Hawaiian Music on Maui.