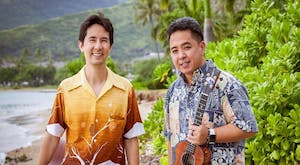 Dinner and Show Tickets ARE NOT AVAILABLE for this show. You can call the Sea House Restaurant directly at (808) 669-1500.

Recognizing his inborn talent, Herb’s grandmother taught him his first ukulele song at the age of three. His father, Ohta-San, started his early formal instruction on the ukulele and Herb continued to study music in high school. Inspired by listening to the Makaha Sons of Ni‘ihau and others he became a devotee of Hawaiian music and the ukulele.

While he enjoys listening to all types of music, Herb’s favorite songs to perform are ballads and all types of Hawaiian songs because they enhance the natural sound of the instrument. Herb’s style is reminiscent of his father’s, but distinct and recognizable as his own. There is a graceful “Nahenahe” quality that is very Hawaiian, reflecting the inspirations of ukulele greats like Eddie Kamae and Ohta-San.

At age 11, Herb, Jr. began teaching at his father’s ukulele school. In 1992, he started his own classes and continues to teach on Oahu at Sonny D’s Ukulele Shop and Harry’s Music Store. He also teaches private lessons by appointment. He is also a favorite instructor at George Kahumoku’s Annual Maui Slack Key Guitar and Ukulele Workshop and has co-authored two outstanding ukulele instruction books with Daniel Ho.

Herb still finds time to compose new material, entertain at private and public functions, produce, and record. He is a seven-time Na Hoku Hanohano Award Nominee and a two-time Hawaii Music Award Winner. He frequently tours Japan and the mainland. He recently completed a west coast tour featuring his solo performances while teaching workshops between concerts.

Jon Yamasato performed with the group Na 'Oiwi (with Dennis & David Kamakahi & Mike Kaawa) recording 2 CDs: Crossroads and The Sequel. He also toured the US with bands such as Keahiwai, Round and Round, and Imua. He often tours Japan with young master ukulele instrumentalist, Herb Ohta Jr. He has performed and recorded with some of the biggest names in Hawaiian Music including Keali`i Reichel, ` Ale`a and Justin Young, and performs regularly at George Kahumoku’s Slack Key Show, usually with Herb Ohta Jr.