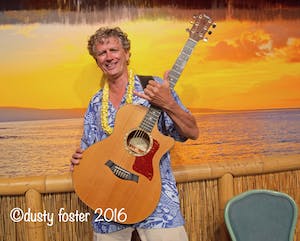 Jim Kimo West is recognized as one of the world’s top “slack key” guitarists and brings his own unique musical perspective to this great acoustic guitar tradition. He is a recent winner of the Hawaii Music Awards, a Na Hoku Hanohano (the Hawaiian “Grammy”) nominee and a two-time winner of the LA Treasures Award for his contributions toward the perpetuation of ki ho’alu.

In 1985, after a long summer on the road with musical satirist “Weird Al” Yankovic, Jim West made his first trip to Hana, Maui and fell in love with cultural and physical landscape of Hawai’i, sometimes spending a couple months a year there. It was there that he also discovered “ki ho ‘alu” or as it is more commonly called, “slack key” guitar, an old Hawaiian style of playing where the strings are loosened or “slacked” to different tunings, allowing the bass, chords and melody to be played simultaneously.

Already a devotee of playing in altered, non- standard tunings, he quickly fell in love with the gentle spirit of slack key and the great sense of discovery that comes with exploring new tunings. Records by Gabby Pahinui, The Sons of Hawai’i, The Sunday Manoa and Peter Moon played continuously on the turntable or cassette deck and Jim absorbed ki ho ‘alu more or less, by osmosis. Jim didn’t concentrate on learning the standard riffs and songs but instead, developed his own slack key vocabulary, which now defines his very unique approach to this great tradition.

His numerous CD’s fuse traditional slack key with his own musical language, while still retaining the essence of its “nahenahe” or “gentle” style. Jim, or “Kimo” as he is called in Hawai’i, has performed at most of the Slack Key guitar festivals in Hawaii and on the mainland. His playing has been featured in a number of films, TV spots, the Disney Channel and National Public radio and he has shared the stage with most of the living legends of ki hoa’lu.

Between composing commissions and slack key guitar playing, Jim also finds time to hone his production chops and has produced CD’s for a number of independent artists. Some recent projects include “Eia Mai Ka La-Here Comes The Sun” (The Mountain Apple Company) for Los Angeles-based Hawaiian performer Kapo Ku and Hawaiian tributes to Sublime and the Eagles for LA’s CMH Records (cmhrecords.com). His new CD, “Na Lani O Maui – Maui Skies” features pristine recordings of both traditional and original slack key tunes and his one of his recent film composing projects is the 3D short film, “Al’s Brain."