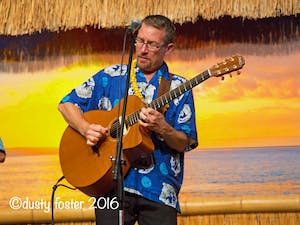 Stephen Inglis is a versatile artist. He crosses genres, yet his music always radiates integrity. Born and raised in Honolulu, he is a Grammy-nominated musician. He records and tours with the most respected traditional musicians. His duet album with legend Dennis Kamakahi, Waimaka Helelei, won Hawaii’s highest musical honor, a Na Hoku Hanohano Award, and the CD is on permanent display at the Smithsonian Institution in Washington, DC. Barely out of his teens, Stephen formed a group with legendary Grateful Dead drummer, Bill Kreutzmann.

Along with his strong respect for tradition, Stephen is a creative innovator. His album Slackin on Dylan opened up new territory for slack key, winning him a Hawaii Music Award. He has made three albums of his own singer-songwriter originals, acoustic and electric. His latest album, “Cut The Dead Some Slack” Grateful Dead interpreted Slack Key style, has been garnering rave reviews worldwide.

Stephen lives the music life to the fullest; club gigs, concerts, festivals, touring, and recording. He has played to sold out crowds at esteemed venues such as “The Barns at Wolftrap” and “Freight and Salvage” in Berkeley. Stephen keeps expanding his musical range, is a great collaborator, always open to finding common ground in melody and harmony.