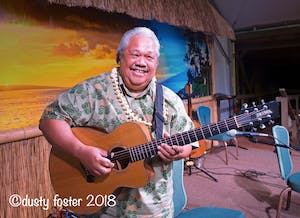 Traditional Slack Key Guitarist & Hawaiian vocalist, Kevin Brown, is the soft spoken leader of the popular Maui group “Ola Hou”. One of Hawaii’s finest musicians and instructors, his easy-going style has deeply influenced a generation of musicians both in Hawaii and on the mainland.

Kevin’s father, Harry, was a popular Hawaiian musician and gave Kevin and his brother, Sheldon, a sound foundation for ukulele, guitar, and traditional Hawaiian songs.

Kevin tells the story of his start with Slack Key. “One day I cut my high school math class and, while sitting under a tree, I heard another class and the teacher, Henry Meyer’s, guitar playing captured my ear with a sound I never heard before. I asked him what kind of music he was playing. He said it’s an old style of Hawaiian guitar called slack key. He said he would teach me if I gave up recess. So for the next 4 years during recess he taught me all the songs and tunings he knew.”

Later Kevin and brother Sheldon, worked 48-hour shifts as paramedics in Lahaina. This schedule gave them time to play music together. Encouraged by co-workers who heard them, they went professional, forming the Waiehu Sons. For the next 17 years they performed at the Stouffer’s Resort/Renaissance in Wailea.

The Brown Family has been perpetuating the art of ki ho’alu (Slack Key) for generations. Kevin’s son, Ikaika Brown, showed an early aptitude for guitar. Ikaika recorded three CD’s, including the cherished “Generations,” which features both his father, Kevin, and grandfather. Kevin and Ikaika are also featured on the two Grammy Nominated CDs Hawaiian Slack Key Kings, vol 1 & vol 2.