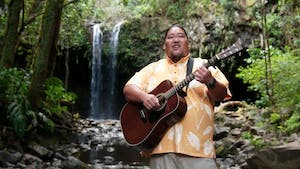 14-time Nā Hōkū Hanohano award winner, Mark Yamanaka, is proud to call Hilo, Hawaiʻi his home. A father of 2, Mark released his debut album, Lei Pua Kenikeni, in 2010. It went on to win 4 of the most coveted awards at the 2011 Hōkūs and in 2013, he followed that success with the release of Lei Maile. Just as successful as its predecessor, Lei Maile also received 4 awards at the 2014 Hōkūs. In 2015, he collaborated with his close friends, Kūpaoa, to release a holiday album, A Gift of the Heart. That album was named Christmas Album of the Year at the 2016 Hōkūs.

After a 5-year hiatus from his solo Hawaiian releases, Mark is thrilled to share his latest collection of songs on this 2018 release, Lei Lehua. He has never released a selection as personal as this one, with 8 of the 14 tracks written or co-written by himself. Lei Lehua is a celebration of Mark's love for his hometown, his love for his family, and his growth as a musician, vocalist, and composer. In 2019 Mark was honored to win 5 Nā Hōkū Hanohano awards for this project including: Album of the Year, Song of the Year (Lei Lehua), Male Vocalist of the Year, Island Album of the Year, and Single of the Year (Morning Drive). Like his previous albums, Lei Lehua is an unforgettable garland of songs, sure to adorn your heart and mind.