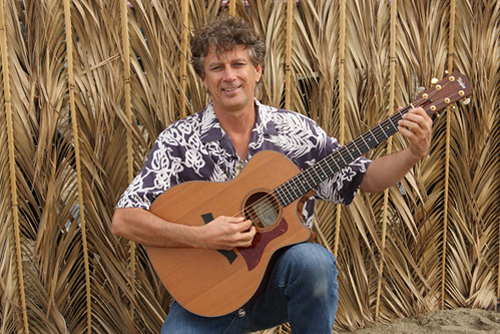 Jim “Kimo” West is a self-taught Slack Key guitarist presently based in Los Angeles.  Most famous as the guitarist for satirist Weird Al Yankovic, Kimo a solid guitar player of all genres.  He fell in love with the sweet sounds of Slack Key on a 1985 visit to Hana and developed his own style over the years. In 2009 and 2012 he was nominated for the coveted Hawaiian Hoku Award for Best Slack Key Guitar Album.

Since 1985 Kimo has spent annual vacations in Hana where he first heard the music of Gabby Pahinui, Sons Of Hawaii, Sonny Chillingworth and Atta Isaacs. Already an accomplished guitarist and musician, and familiar with alternate tunings, ki ho’alu became his new passion.

Kimo is a 2008 winner of the Hawaii Music Awards for Slack Key. He is also a two-time winner of the LA Treasures Award for his efforts in keeping this important acoustic guitar tradition alive.

Kimo’s show encompasses both traditional and contemporary, both standard and  original slack key songs as well as vocals in both Hawaiian and English. He uses several different tunings in his set, including some of his own invention.  These original tunings have been recognized in George Winston’s extensive compendium of ki ho’alu tunings.

He is a veteran of Hawaii’s slack key festivals as well as the recent So Cal Slack Key Festival in 2008 and 2009 and has shared the stage with Hawaii’s top slack key players.

Kimo is well-known as long-time guitarist for the world’s most successful musical satirist, “Weird Al” Yankovic, with whom he has received three Grammy’s and many gold and platinum records. They have recently performed on the Tonight Show with Jay Leno and the Jimmy Fallon Show. He also contributes to production duties on the CD’s and recently scored Al’s 3D mini-feature, “Al’s Brain”.

Kimo has also worked as a composer for film and TV for many years and maintains a sophisticated private studio in Los Angeles. He has composed music for four features, network TV shows and specials and cable shows. His slack key compositions have been used in a number of Honda TV spots, on The Disney Channel and in many documentaries. He recently composed all the music for the Hawaii production of “Ho’okele Wa’a-Turning The Canoe”, a film for the Sustainable Living Institute of Maui, directed by Danny Miller.