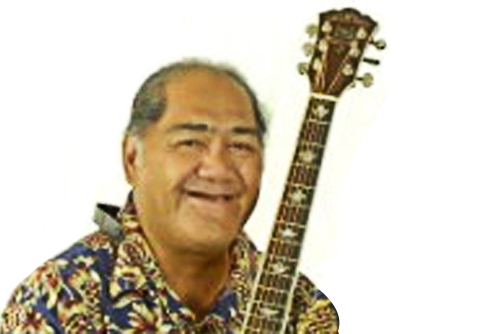 One of Hawaiian music’s most gifted vocalists, Martin Pahinui has performed with a host of top artists, including his father’s legendary Gabby Pahinui Hawaiian Band, The Peter Moon Band, and slack key super group Hui Aloha. On HO’OLOHE – (LISTEN), his long awaited first solo CD on George Winston’s Dancing Cat label, Martin shares his aloha for the traditional sound with thirteen classic tracks full of slack key, steel guitar and a passionate voice that expresses the essence of Hawaiian soul and harkens back to the glory days of slack key greats like his mentors: Gabby, Atta Isaacs and Sonny Chillingworth. Martin’s distinctive voice, reminiscent of his father’s, ranges from the tender leo ki’eki’e (falsetto) of “Pua Lilia” to the rollicking powerful yodels of “Hanohano Hawai`i”. This CD was a finalist for Hawaiian Album of the Year and Best Male Vocalist of the Year at the 2004 Na Hoku Hanohano Awards.

“My wife Ruthie suggested Ho’olohe,” says Martin. “That means to listen. I hope that people enjoy listening to the music we share on this album. These are songs we listened to when we were young and it’s such a blessing to be able to play them today.”

The youngest child of Gabby and Emily Pahinui, Martin grew up surrounded by music: not only the amazing ki ho’alu (slack key) in his family home but also the many other styles floating on the wind in Waimanalo, where he grew up and still lives. Martin quickly jumped into music, picking up Hawai`i’s favorite starter instrument, the ‘ukulele, around age three. “None of us ever got any lessons but the music was always there,” Martin says, “so if you listened closely enough you could catch on.”

By intermediate school, Martin picked up guitar, joining his brothers in a rock band called The Characters. “We did ‘Johnny B. Goode’ and all that,” Martin says. About that time, he also picked up his nickname, “Gramps”. “I used to wear overalls, like the old folks” he says, “and somehow the name stuck.”

Martin’s favorite rock group was and still is The Beatles. “Their songs are so extraordinary,” he says. He counts as two of his career highlights meeting Ringo Starr in Los Angeles and chatting with George Harrison on the phone when the shy, spiritual Beatle was living on Maui. “He had a high respect for Hawaiian music,” Martin says, “He said he had all of my daddy’s records and a lot of other local artists. We invited him to our sessions but he said he didn’t want to interfere. I wish we could have gotten to play with him, but I can appreciate his feelings.”

In the early 1970s, Martin joined his father Gabby Pahinui, Sonny Chillingworth, Atta Isaacs and others in the legendary Gabby Pahinui Hawaiian Band. The group’s easy-going style and high level of artistry enjoyed great popularity and inspired many young musicians. “All of us young guys wanted to latch on to what the older ones were sharing,” Martin says. While many young people still enjoy learning from na kupuna (elders), today’s radio stations and clubs target specific age groups, which limits the mixing of the generations. “We played with musicians of all ages to audiences of all ages,” he says. Young bands today don’t get many opportunities to do that. It’s much harder for them to learn – not just the songs but also older ways of playing them.

The release of Dancing Cat label’s 1999’s album of slack key super group Hui Aloha (Martin Pahinui, Dennis & David Kamakahi, George Kuo) marked Martin’s debut on Dancing Cat. “George Winston asked me about doing something for Dancing Cat way back when I was with Peter Moon,” Martin says. “Many years later, when we were making the Hui Aloha album I told him “Wow, you sure are patient!”

After nearly a half century making music, Martin reflects a firm commitment to both honoring and extending the Pahinui slack key legacy. “My daddy is a very big influence on all of us,” Martin says. “But he always did things his own way and he taught us to trust our own instincts too. He always said the key was to respect the culture and then do your music in the way that brings you the most enjoyment.”