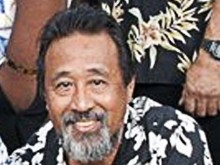 A skilled Hawaiian lap steel guitarist and vocalist, Geri recently retired from the bench (he was a family court judge) to become a professional musician.  Geri was a student of steel guitar master, Jerry Byrd. For many years he has been the steel player for some of Maui’s most popular groups:  Ola Hou (featuring Kevin, Sheldon & Ikaika Brown with the late Pekelo Cosma and Geri), The Waiehu Sons, and Maui Jam.  Now performing full time, Geri can be seen all around Maui including at Mulligan’s with Maui keyboardist Joel Katz and at George Kahumoku’s Slack Key Show sometimes performing with Slack Key great, Kevin Brown