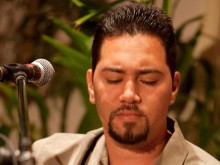 Born and raised on the beautiful island of Maui (Hawaii), Ikaika is the son of Kevin Brown, one of Maui’s ambassadors of Ki Ho’alu (Slack Key). Ikaika showed an interest in learning this Hawaiian style of guitar at age 9.  When he was 14, Ikaika released his first CD entitled, Kalo Man, which is mostly Slack Key instrumentals songs, except for the title song, “Kalo Man,” which was inspired by a school project. Kalo Man, received 2 prestigeous Na Hoku Hanohano nominations.   At the time, Ikaika was the youngest slack key musician on Hawaii’s Slack Key circuit, giving him the opportunity to learn from some of Hawaii’s top Slack Key artist. Ikaika’s other main influence besides his father was, Uncle Pekelo Cosma. In 1999, at age 17, Ikaika released his second CD, Ekolu Hanau Na Nei, Three Generations, including Ikaika, his grandfather, Harry Brown Sr., and his father, Kevin Brown. That year Ekolu Hanau Na Nei won a Na Hoku Hanohano award in the Haku Mele category for the song “‘Opiopio,” which featured Grandpa Brown.

Ikaika & Kevin Brown, are famous as Maui’s “father-son slack key duo”, performing together for over 20 years. In 2006 they contributed to the Grammy nominated compilation CD, Hawaiian Slack Key Kings Volume 1 and then once again to Volume 2, which was both Grammy nominated and also a Na Hoku Hanohano Award winner for Best Compilation in 2009.

Ikaika has expanded his repetoire into other styles of music including Classic Rock & Jazz. Ikaika was the music director for the Royal Lahaina Luau for the last ten years until he recently relocated to Las Vegas.

Ikaika now can be heard at Island Sushi (Plaza Hotel) in downtown Las Vegas playing a wide range of music that still holds true to his roots and love of Ki ho’alu. He intends to return to Maui every year to perform at the MACC 4 Father/4 Sons Father’s Day show and is joining in as an instructor in George Kahumoku’s week-long Maui Slack Key Guitar & Ukulele Workshop 2012 before returning to Las Vegas.