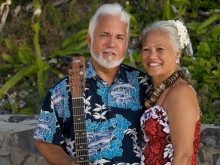 John Keawe is a multiple award winning singer/songwriter and slack-key guitarist who was born on the Big Island of Hawaii, in the little town of Hawi in North Kohala. John is mostly self taught, performs many of his own compositions, but also some traditional vocal and instrumental songs.  He is accompanied by his lovely wife, Hope, who dances hula for him.

After a four-year tour in the Navy, John returned home and was drawn to the sound of Hawaiian slack-key. He listened, watched, and taught himself to play this style of music. Through the years, he has developed his own distinct style.

Of all his recordings, seven were nominated for Na Hoku HanoHano Awards . The CD Ho`onanea won  in 1994 for Best Instrumental. At the 1998 Hawaii Music Awards, John won best slack-key artist for his Mana`olana. In 2003 , John received a Hawaii Music Award for Aloha Kaikua`ana. He also won a Hoku Award for Ki-ho`alu which is a special award given to an artist for perpetuating the art of slack-key guitar.

In 2005, John was honored as a contributing artist on Hawaii’s first Grammy Award for Best Hawaiian Music Album for an all instrumental compilation CD entitled Slack Key Guitar Vol. 2 on Palm Records.

2009 John received his first Na Hoku Hano Hano Award for Slack-Key Album of the Year for the CD Hawai`i Island…Is My Home.

With his tenth album, Play With Me Papa, John received his fourth Na Hoku Hano Hano award for Slack-Key Album of the Year in 2011..

John performs regularly on the Big Island and on Maui at George Kahumoku’s Slack Key Show or sometimes at the Maui Arts & Cultural Center. He often teaches at Keoki Kahumoku’s Music & Lifestyle Workshops where he is a favorite Slack Key instructor.