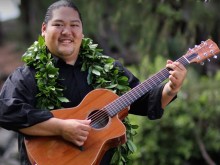 Mark Yamanaka came out into the Hawaiian music scene in November of 2010 with the release of his long awaited debut solo album entitled “Lei Pua Kenikeni”. This album was celebrated at the 2011 Na Hoku Hanohano Awards taking home 4 big awards that put him aside Hawaiian Music greats Keali’I Reichel and Willie K. On his debut solo effort, Mark took home the coveted Album Of the Year, Male Vocalist of the Year, Song of the Year (Kaleoonalani), and Most Promising Artist of the Year. Immediately Mark became a frequent traveler within the state of HawaiʻI and Japan

After three long years, Mark finally released his long-awaited sophomore CD “Lei Maile” in Nov. 2013. Since then it has hit The Top 10 Billboard World Music Chart, and nominated in 10 categories and more recently became a finalist in the 2014 Na Hoku Hanohano Awards.