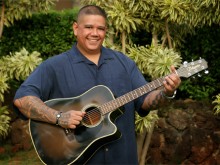 Sean Na’auao is a Slack Key guitarist and vocalist, composer and producer and has won Hawaii’s prestigious Na Hoku Hanohano Awards multiple times including Island Contemporary Album of the Year for his popular “Fish and Poi”.  Recognized for his exceptional vocal ability, he made Frank Hewitt’s traditional Hawaiian composition, “Kapilina,” a famous hit.

Sean can’t remember a time when music wasn’t a part of his life. His career in music encompasses everything including composing original songs, producing himself and other artists, lead and background singer, bandleader, concert promoter as well as the founder of an independent record label, Poi Pounder. Sean was a founding member of the Mana’o Company, a group that made a huge mark on the Hawaiian music scene in the 80s and 90s, using beautiful four part vocal harmony (sounding something like the Four Tops, but Hawaiian). His repertoire runs from the most contemporary of island music to the heartfelt traditional Hawaiian mele.

2003 – Christmas Album of the Year (A Kanaka Christmas)