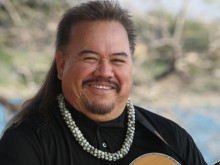 Slack Key Guitarist, Lap Steel Guitarist, vocalist, songwriter, producer, Sonny developed his guitar & vocal styles performing with his famous Lim Family of the Big Island. He was also one of the early members of the Makaha Sons of Ni’ihau for whom he played lap steel guitar beginning at age 15. In recent years, Sonny’s solo instrumental album, Slack Key Guitar: The Artistry of Sonny Lim, was a Grammy nominee for Best Hawaiian Music.

A member of Hawaii’s musical Lim Family, Sonny was born and raised in the heart of paniolo (cowboy) country on the Big Island of Hawaii. His father worked at Parker Ranch, and Sonny went on to work there too.

Sonny was originally inspired to play Slack Key by the legendary Gabby Pahinui whom he saw performing at a local lu’au and as a result, Sonny began studying the guitar. At age 12 his Uncle Fred Punahoa, also teacher to the legendary Ledward Kaapana, noticed Sonny, and spent several weeks living with the Lim family, instructing him.

Sonny’s professional career began as steel guitarist for the famous Makaha Sons of Ni’ihau of which the famous Iz was a leading member.

Sonny has since become a respected solo artist, a group member with the Lim Family, Amy Hanai’ali’i, as well as a sought after studio musician.