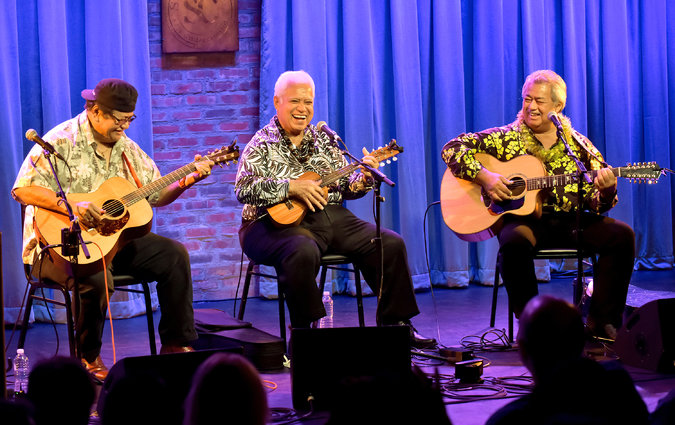 During a handful of small, transcendent moments in “Masters of Hawaiian Music,” at SubCulture on Wednesday night, the line between craftsmanship and showmanship blurred to the point of irrelevance. The concert’s distinguished artists — George Kahumoku Jr. and Ledward Kaapana on guitars, and Uncle Richard Ho‘opi‘i on ukulele — played and sang in a traditional Hawaiian mode, bringing folklore and cultural memory into a performance that unfolded as breezy entertainment.

Which was in keeping with the nature of their art form, and the elite but approachable stature that each of these musicians enjoys at home in the islands. “Masters of Hawaiian Music” is a touring version of Mr. Kahumoku’s “Slack Key Show,” which runs every Wednesday and Thursday night at the Napili Kai Beach Resort on Maui. A homegrown revue regularly stocked with special guests, it has been a magnet for fans of ki ho‘alu, or slack-key guitar — and the source of Grammy-winning compilations in the contentious, since-discontinued category of best Hawaiian music album.

Mr. Kahumoku assumed a natural role as the evening’s host, peppering the show with charming, picaresque stories (“I grew up with 26 cousins in the same household,” went the setup to one of these), and speaking with ease about the origins of the songs. Before singing “I’ll Remember You,” a beloved Hawaiian standard, he recalled his debt to its songwriter, Kui Lee, who gave him his first break at age 11. At every turn he got a richly chiming tone from his acoustic guitar and favored a light, easeful flow of rhythm.

A flintier virtuosity fortified Mr. Kaapana’s playing, on well-honed showpieces like “Mauna Loa Slack Key,” with its trotting gait and trick fretwork, and “Opihi Moe Moe,” with a springiness of touch that momentarily called Django Reinhardt to mind. His solo portion of the concert included a quiet tour de force in “Radio Hula,” its two-step bass line overlaid with fluttery triplets, deft harmonics and shapely arpeggios. There, and again on “Pauoa Liko Ka Lehua,” he also flirted with chromatic tension, sometimes stretching the dissonance over the bar line before resolving to the root chord.

Both Mr. Kahumoku and Mr. Kaapana also sang, with warmth and feeling, but the program’s vocal heavyweight was unquestionably Mr. Ho‘opi‘i, one of the leading stewards of leo ki‘eki‘e, or Hawaiian falsetto. The sweet keen of his upper range was the concert’s most magical timbre, followed by the gentle clarity of his tenor. On “Hawaiian Cowboy,” he played with the break between registers, in a western yodel.

The camaraderie among the musicians, formed many years ago, brought an extra layer of coherence to a program that touched on mele, or ancient chants, along with repurposed Protestant hymns, Tin Pan Alley tunes and modern fare. By the time the audience was asked to stand and join hands for “Hawai‘i Aloha,” an anthem of native Hawaiian culture, its message of solidarity felt inseparable from a spirit of openness.

Read the Article on The NY Times