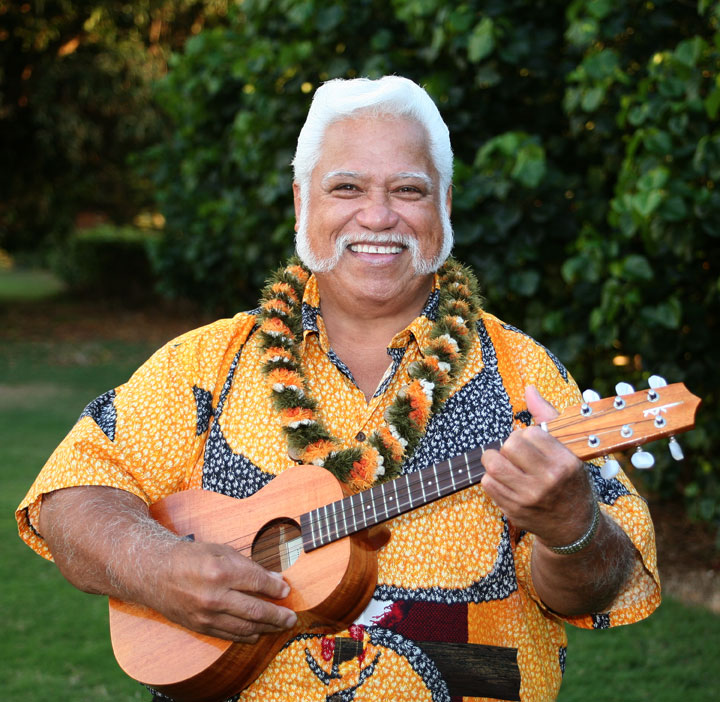 Possessing an amazing vocal range, from bass through to falsetto, Richard Ho’opi’i has a voice, powerful and controlled, even in the highest registers. This talent combined with his engaging smile and stage charisma, makes Richard a perennial crowd pleaser.

Best known as one half of the popular Maui duo, The Ho’opi’i Brothers, he has practiced the traditional Hawaiian art of leo ki’eki’e (falsetto) his whole life. He and his brother, Solomon (his life-long singing partner) were recipients in 1997 of the prestigious National Endowment of the Arts Folk Heritage Fellowship, America’s highest honor for traditional artists.

Born in the tiny village of Kahakuloa on Maui’s remote Northwest coast, Richard grew up immersed in the rural Hawaiian lifestyle of family, church, taro farming, fishing, and homemade entertainment. There was no TV, nor even much radio, so everyone in the village helped make music.

As a child, Richard sang while doing his chores, at church and at school. As a teenager, Richard was invited to join the All Maui Choir, under the direction of the legendary Royal Hawaiian Band singer Alice Johnson. Slack key guitarist Sonny Chillingworth provided valuable professional experience by inviting young Richard to perform occasionally with his band. Kumu hula (hula masters) also asked him to perform with their dancers on a regular basis. “What an honor,” he says. “Aunty Alice, Aunty Emma Sharpe, Uncle Sonny, Aunty Genoa Keawe, our mom and dad, brothers and sisters. They taught us so much more than music; it was a whole way of living.”

In 1968, Richard and his brother Sol started their own group, The Ho’onanea Serenaders, which after several years became known simply as The Ho’opi’i Brothers. Together they recorded seven albums and performed widely.

After the passing of his brother, Richard recorded CD, Ululani, named for his lovely wife, and representing a new journey as a solo artist. Richard selected a mixture of favorite songs from his hometown of Kahakuloa on Maui, performed in the old way. The recording showcases his unique style of singing and firmly establishes him as a solo performer.

Richard is featured on three of George Kahumoku Jr’s Grammy Award winning compilation CDS which were respectively honored with the 49th, 50th, and 52nd Annual GRAMMY Awards for Best Hawaiian Music Album.  He is a frequent guest artist at Maui’s Slack Key Show and travels regularly to the mainland with the Masters of Slack Key Guitar.